This report published in Communicable Diseases Intelligence, Volume 28, Number 2 contains the Victorian influenza annual report for 2003. Surveillance of patients with ILI seen by the Melbourne Medical Locum Service (MMLS) was conducted for the first time in 2003, when the influenza season was characterised by a late onset with higher than normal seasonal activity.

Influenza surveillance in Victoria comprises surveillance of patients with influenza-like illness (ILI) from sentinel general practices and laboratory based reporting of influenza detections, predominantly from hospital inpatients. Surveillance of patients with ILI seen by the Melbourne Medical Locum Service (MMLS) was conducted for the first time in 2003, when the influenza season was characterised by a late onset with higher than normal seasonal activity. Influenza A (H3N2) was the predominant circulating influenza virus type, with 99 per cent of sub-typed viruses identified as a drifted strain, A/Fujian/411/2002-like. Sentinel and hospital laboratory surveillance both indicated low levels of circulating influenza A (H1N1) and influenza B. Although the proportion of patients with ILI detected through MMLS surveillance was greater than the proportion from sentinel general practices, the ILI pattern was comparable between the two surveillance systems. Commun Dis Intell 2004;28:175-180.

Influenza surveillance in Victoria comprises ascertainment of patients with influenza-like illness (ILI) through sentinel general practices and laboratory based reporting of influenza detections, predominantly from hospital inpatients.1 Laboratory confirmed influenza is also notified to Victoria's Department of Human Services. ILI surveillance from the Melbourne Medical Locum Service (MMLS) was conducted for the first time in 2003.2 The aim of surveillance is to facilitate the early detection of influenza, define its distribution and provide information on circulating influenza virus strains. The sentinel surveillance program is based at the Victorian Infectious Diseases Reference Laboratory (VIDRL).

In this report we aim to review the 2003 influenza season in Victoria and to compare surveillance data from sentinel general practices with that from the MMLS.

Influenza surveillance was conducted in Victoria for 22 weeks between 28 April and 28 September 2003 (weeks 18-39 inclusive).

Seventy-nine general practitioners (GPs) from 19 metropolitan and 21 rural practices were recruited for sentinel ILI surveillance. Practices in specific locations were targeted to ensure an even distribution throughout metropolitan and regional Victoria. GPs were required to report weekly on the total number of consultations and the number of patients with ILI. The ILI case definition of fever, cough and fatigue was developed from a review of Victorian and Western Australian surveillance data.3 A standard data collection form was used to record age, sex and vaccine status. Data were submitted without patient identifiers.

In addition to surveillance of patients with ILI, GPs were asked to collect a nose and throat swab from those patients who fulfilled the case definition for influenza and had presented within three days of onset of symptoms. Specimen collection was at the discretion of the GP. Information on each patient's vaccination status, symptoms and date of onset and the GP's clinical impression of the likelihood of influenza (almost certain, probable or less likely) was forwarded with each sample.

Specimens were tested at VIDRL using an in-house respiratory multiplex polymerase chain reaction (PCR) adapted from published assays.4,5,6 This assay identifies influenza A (H3N2 and H1N1), influenza B, adenovirus, picornavirus (enterovirus and rhinovirus), respiratory syncytial virus (RSV) and parainfluenza viruses. A small amount of bovine viral diarrhoea virus (BVDV) was spiked into each specimen prior to RNA extraction to act as a control for inhibitors of the PCR. When influenza virus was detected, aliquots of the original specimens were forwarded to the WHO Collaborating Centre for Reference and Research on Influenza for virus strain sub-typing. Specimens from outbreaks of influenza that had been tested at VIDRL were also forwarded for sub-typing.

In addition to sentinel practice surveillance, laboratory based surveillance of influenza was carried out by four metropolitan laboratories at The Royal Children's Hospital, Monash Medical Centre, The Alfred Hospital and VIDRL (diagnostic specimens other than specimens tested as part of surveillance). These laboratories reported all influenza that was identified by virus isolation, direct detection of viral antigen or nucleic acid assays.

Rates for ILI were calculated per 100 consultations using the total number of weekly consultations as the denominator. Consultation and laboratory surveillance data were collected on a weekly basis and reports were generated fortnightly. These were disseminated to participating general practitioners, other interested health professionals and State and Commonwealth Departments of Health. Reports were also posted on the VIDRL web site (http://www.vidrl.org.au).

In addition to the sentinel general practice surveillance, data were collected for the first time on a weekly basis from the Melbourne Medical Locum Service, which provides a 24-hour, seven days a week medical service to patients within metropolitan Melbourne, although there is no information on the representativeness of the patients seen. Most locum consultations occur after normal working hours and usually involve general practice patients with an acute medical problem. Patients are seen in their homes. All information, including a list of the patient's presenting symptoms and a final working diagnosis from the attending doctor, is routinely entered into a database maintained by the MMLS. Data were extracted using the working diagnosis of 'flu' or 'influenza'. MMLS transmitted data electronically to VIDRL each week.2

Of the 40 sentinel practices recruited throughout metropolitan Melbourne and rural Victoria, 39 provided data (Figures 1a and 1b), with an average of 34 practices (85% of those participating) contributing ILI data per week. There were 143,168 consultations recorded of which 1,277 (0.9%) were for ILI.

Figure 1a. Distribution of sentinel surveillance sites in rural Victoria 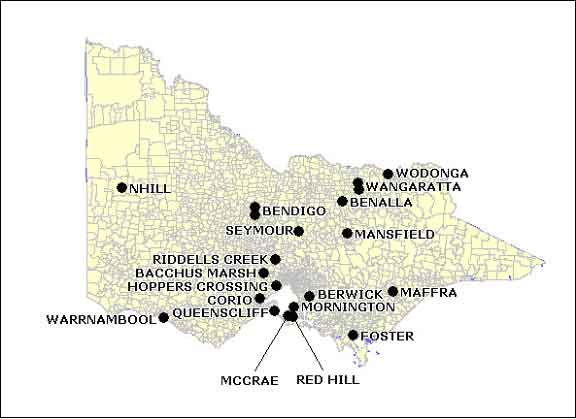 Figure 1b. Distribution of sentinel surveillance sites in metropolitan Victoria 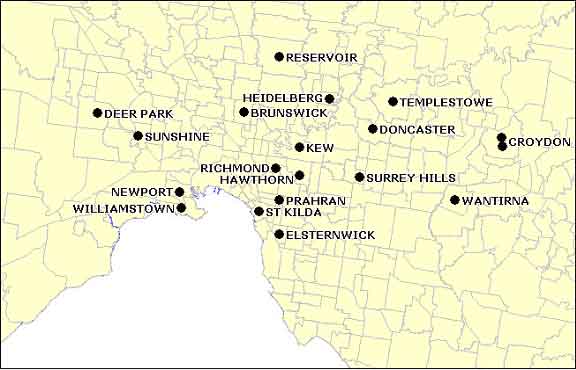 The weekly GP consultation rate for ILI peaked at higher than normal seasonal activity. ILI activity started to rise from week 31, reaching a peak of 3.4 per 100 patients by week 34 and declining to baseline activity by week 39 (Figure 2). Figure 3 compares the ILI consultation rate in 2003 with the rates from 1997 to 2002. This was the first reported influenza season since 1998 where peak levels were higher than the expected normal seasonal activity.

Over the 2003 surveillance period, specimens were collected from 540 patients with ILI. Thirty-six samples were inhibited and were not included in further analysis. Of the 504 non-inhibited specimens, 184 (37%) were confirmed as influenza. Influenza A (H3N2) was the predominant virus detected (98% of all influenza PCR positive specimens) with only three (2%) influenza B PCR positive specimens.

Aliquots of all PCR positive influenza A and influenza B specimens were sent to the WHO Collaborating Centre for Influenza for virus strain sub-typing. Of the 115 isolates recovered, 114 (99%) were typed as A/Fujian/411/2002-like and one (1%) was A/Moscow/10/99-like.

In addition to influenza A and B viruses, 65 specimens (13% of all patients with ILI) were PCR positive for other respiratory viruses, of which picornaviruses and respiratory syncytial virus were the most common non-influenza viruses (Figure 4).

Table. General practitioner perception of the likelihood of influenza by weeks of the surveillance season

During the entire season, for any level of diagnostic certainty, the positive predictive value for the diagnosis of influenza was 37 per cent, but this rose to 47 per cent when considering only metropolitan GPs during the weeks when ILI activity was high.

Patient vaccination status was not analysed as status was unknown for 172 (34%) patients and not validated for those in whom it was reported.

Specimens from five outbreaks of respiratory disease were tested by VIDRL during 2003, of which four were confirmed to be due to influenza A (H3N2). A/Fujian/411/2002-like influenza was detected from all outbreak specimens that were forwarded for virus strain sub-typing to the WHO Collaborating Centre for Influenza.

Comparison of sentinel and laboratory surveillance

Figure 5. Comparison between surveillance and laboratory results, by age group

The season was characterised by the identification of a new strain of A (H3N2) influenza. The WHO Collaborating Centre for Reference and Research on Influenza introduced the reference strain of A/Fujian/411/2002-like for reporting of antigenic analysis. According to the Centre this is a drift variant of A/Moscow/10/99-like strain.8

Although A/Fujian was not included in the vaccine formulation for 2003, it was thought that the A/Moscow vaccine strain would provide some protection from A/Fujian infection.8 The WHO Collaborating Centre for Reference and Research on Influenza reported that 'the A/Fujian-like viruses are still related to the A/Moscow-like strain included in the current vaccine and the vaccine has been demonstrated to induce antibodies to the A/Fujian-like strains, but generally at a reduced level. This suggests the possibility that there may be some reduction in the protective value of the vaccine, however this cannot be quantified.'8

The GPs' positive predictive value for influenza appeared to be lower in 2003 than in most previous years.7 Of the 504 patients tested for influenza and other respiratory viruses, GPs indicated that they were almost certain that 191 patients had influenza. Influenza was detected in only 25 per cent of these specimens compared to 2002 when the comparable rate was 54 per cent. The GPs were rewarded with continuing medical education points from the Royal Australian College of General Practitioners for participation in the sentinel influenza surveillance program. In 2003 the College introduced a requirement that a minimum of five swabs needed to be obtained to qualify for these points. This, coupled with a very late seasonal peak, may have accounted for the decreased rate of detection of influenza when GPs were confident of the diagnosis. We performed a restricted analysis of metropolitan GPs in the weeks when ILI activity was high because transport to the laboratory is faster in the metropolitan area and testing may therefore have been more likely to detect influenza viral RNA when it was present. In this restricted analysis, the proportion of patients with an ILI confirmed to have influenza increased with the GP's certainty of the diagnosis. However the one GP whose positive predictive rate was 100 per cent from six patients was a regional practitioner who sent the first nose/throat swab from a patient with ILI in week 34, near the peak of ILI activity.

Victorian ILI surveillance has traditionally focused on consultations with metropolitan and regional GPs. The introduction of the MMLS surveillance for the first time this year provided an additional indicator of influenza activity. Overall the pattern of ILI was consistent between the two systems. This had also been demonstrated in a retrospective comparison of MMLS and sentinel surveillance data.2 As anticipated, there was a higher proportion of patients with ILI from MMLS. This could be attributed to the different nature of the practices and possibly to differing case definitions for ILI. Although sentinel general practitioners use a specific case definition, data extracted from the MMLS database were based on reference to 'flu' or 'influenza'. Collection of surveillance data from MMLS will continue all year, whereas the sentinel surveillance is only conducted during the influenza season from May to September. In general, the use of MMLS surveillance needs to be tested using the same case definition as the sentinel surveillance but, for determining relative seasonal ILI rates, has the potential to simplify what is currently a labour intensive scheme. However collecting specimens from patients seen by MMLS GPs proved to be logistically difficult and it appears that sentinel practitioners will continue to be needed for the collection of specimens from patients with an ILI.

We would like to thank the general practitioners and their staff, the hospital laboratories and the generous support of the pathology providers who have all assisted us in the 2003 program. We are grateful to all specimen reception and laboratory staff at VIDRL. We extend a special thanks to the MMLS for generously providing their locum service data. We acknowledge the collaboration of the WHO Collaborating Centre for Reference and Research on Influenza. The sentinel surveillance program is supported in part by the Department of Human Services, Victoria.

8. WHO Collaborating Centre for Reference and Research on Influenza Melbourne, Australia. Antigenic drift in Influenza A (H3N2) Strains. Available from http://www.influenzacentre.org/flunews.htm Accessed: 23 October 2003.