Zoonoses are those diseases and infections that are naturally transmitted between vertebrate animals and humans.111 Approximately 60%–70% of emerging human infectious diseases are zoonoses112–114 and more than 70% of emerging zoonoses originate from wildlife.113 An emerging zoonosis is defined by WHO as “a zoonosis that is newly recognised or newly evolved, or that has occurred previously but shows an increase in incidence or expansion in geographical, host or vector range”.115

Several zoonoses notifiable to the NNDSS are included under other headings in this report. For example, Salmonella and Campylobacter infections are typically acquired from contaminated food and are listed under the gastrointestinal diseases section. Rabies is listed under Quarantinable diseases.

Anthrax is caused by the bacterium Bacillus anthracis and most frequently causes cutaneous infection. However, it can also cause gastrointestinal and respiratory infections. Anthrax is primarily a disease of herbivores; humans and carnivores are incidental hosts. It can be an occupational hazard for veterinarians, and agriculture, wildlife and livestock workers who handle infected animals or by-products. 21

In Australia, the areas of anthrax risk are well defined and include the northern and north-eastern districts of Victoria and central New South Wales.116 Anthrax occurs only sporadically in livestock in the at-risk areas. Rare or isolated incidents or cases have historically occurred in Queensland, South Australia, Tasmania and Western Australia.116

In 2013 there were no notified cases of anthrax in Australia. Over the previous 10 years, only 3 human cases of anthrax were reported in Australia; in 2006, 2007 and 2010.117–119 All had domestic farm or animal related exposures and all were cutaneous anthrax. Australia has never recorded a human case of inhalational or gastrointestinal anthrax.

There were 2 anthrax incidents reported in livestock in Australia in 2013. All properties were located within the known New South Wales anthrax endemic area.116

ABLV belongs to the genus lyssavirus, which also includes the rabies virus. Both invariably result in progressive, fatal encephalomyelitis in humans.120 ABLV was first identified in Australia in 1996.121,122 and is present in some Australian bats and flying foxes. Australia is free of terrestrial rabies.

The best way to prevent ABLV infection is to avoid contact with bats. For people whose occupation (including volunteer work) or recreational activities place them at increased risk of being exposed to ABLV, rabies virus vaccine is effective in preventing infection. Pre-exposure vaccination with rabies virus vaccine is recommended for bat handlers, veterinarians and laboratory personnel working with live lyssaviruses.123 Post-exposure prophylaxis for ABLV consists of wound care and administration of a combination of rabies virus vaccine and human rabies virus immunoglobulin, depending on exposure category and prior vaccination or antibody status.50,123

The bat health focus group in Wildlife Health Australia (formerly the Australian Wildlife Health Network) gathers and collates information from a range of organisations on opportunistic testing of bats for ABLV. In 2013, there were 14 ABLV detections in bats compared with 5 detections during 2012.129

Brucellosis is characterised by a fever of variable duration with symptoms including headache, weakness, profuse sweating, chills, arthralgia, depression, weight loss and generalised aching.21 Brucella species that can cause illness in humans include Brucella melitensis acquired from sheep and goats, Brucella suis from pigs and Brucella abortus from cattle. B. abortus was eradicated from Australian cattle herds in 1989 and B. melitensis has never been reported in Australian sheep or goats.130 Therefore, all cases of B. melitensis or B. abortus in Australia are related to overseas travel. B. suis is confined to some areas of Queensland, where it occurs in feral pigs. Eales et al (2010)131 found that feral pig hunting was the most common risk factor for brucellosis in Townsville during 1996 to 2009.

Internationally, brucellosis is mainly an occupational disease of farm workers, veterinarians, and abattoir workers who work with infected animals or their tissues.21

Figure 83: Notified cases of brucellosis, Australia, 2008 to 2013, by month and year of diagnosis and state or territory 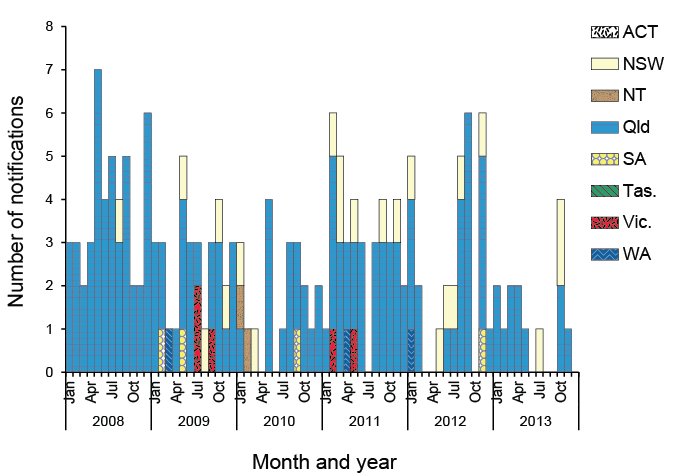 The species of the infecting organism was available for 57% of cases (n=8). Of these, 5 cases were B. suis; four from Queensland and one from New South Wales. All were males aged between 22 and 46 years. There were 3 cases of B. melitensis, with the countries of acquisition listed as Iraq, Iran and Afghanistan. All other cases of brucellosis acquired the organism in Australia.

Leptospirosis can cause a variety of illnesses varying in severity from a mild influenza-like illness to Weil’s syndrome, meningitis or pulmonary haemorrhage with respiratory failure possibly leading to death.21 Leptospirosis is caused by spirochaetes of the genus Leptospira, which is found in the genital tract and renal tubules of domestic and wild animals. In affected areas where there is exposure to infected urine of domestic and wild animals, this disease can be an occupational and recreational hazard (such as in certain agricultural sectors and swimming or wading in contaminated water.132,133 The last reported death in Australia attributed to leptospirosis was in 2002.134

Figure 84: Notified cases of leptospirosis, Australia, 2008 to 2013, by month and year of diagnosis and state or territory 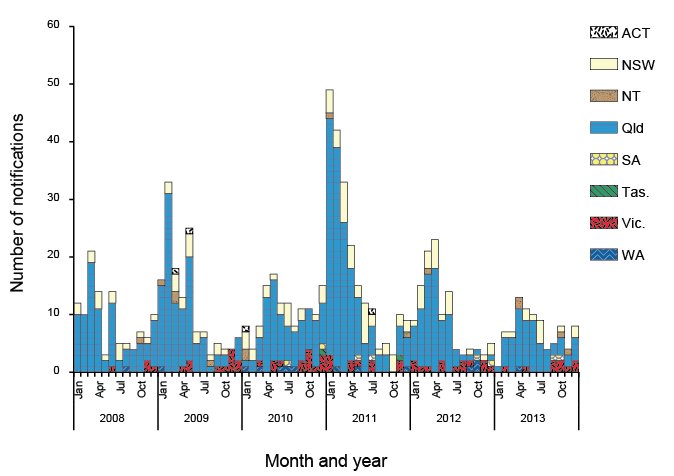 The WHO Food and Agriculture Organization World Organisation for Animal Health Collaborating Centre for Reference and Research on Leptospirosis routinely conducts PCR-based serotyping for leptospirosis cases from Queensland (from whence the majority of cases are reported), and collates national data that may be submitted to the laboratory from other states or territories. At the time of compiling this report, data for 2013 were not publicly available.

Ornithosis (or psittacosis) is a pneumonia-like illness caused by infection with the bacterium Chlamydophila psittaci.21 It is transmitted to humans primarily from infected parrots of many species, but also poultry and a range of other birds.135 Transmission to humans can occur via the inhalation of contaminated dried faeces, nasal or eye secretions and dust from the feathers. Individuals at risk of contracting ornithosis include bird owners and those with occupational exposure to birds.136

Figure 85: Notified cases of ornithosis, Australia, 2008 to 2013, by month and year of diagnosis and state or territory 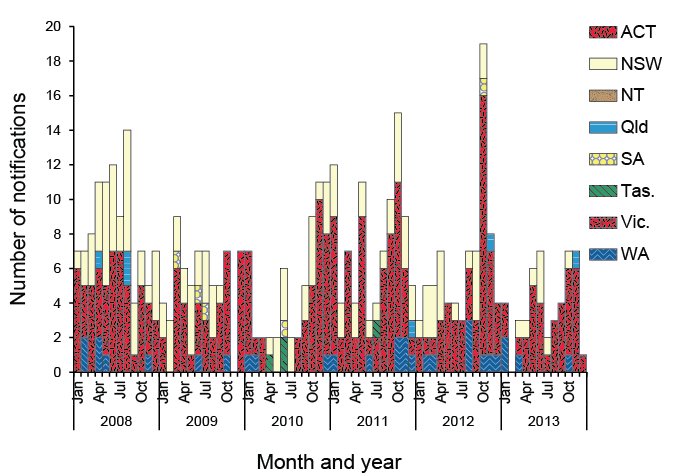 Q fever is caused by infection with the bacterium, Coxiella burnetii. The primary reservoirs of these bacteria are cattle, sheep and goats. Coxiella burnetii is resistant to environmental conditions and many common disinfectants.137 Q fever is most commonly transmitted via the airborne route, where the organism is carried in dust contaminated with tissue, birth fluids or excreta from infected animals.138 Prior to the commencement of vaccination programs in Australia, approximately half of all cases in New South Wales, Queensland and Victoria were among abattoir workers.139,140

The Australian Government funded the National Q Fever Management Program (NQFMP) between 2001 and 2006 for states and territories to provide free vaccine to at-risk groups (such as abattoir workers).141

Adults at risk of Q fever infection, including abattoir workers, farmers, veterinarians, stockyard workers, shearers and animal transporters, should be considered for vaccination. The administration of the Q fever vaccine requires a pre-vaccination screening test to exclude those recipients with a previous (possibly unrecognised) exposure to the organism, including previous vaccination. A Q fever vaccine may cause an adverse reaction in a person who has already been exposed to the bacterium. Vaccination is not recommended for children under 15 years of age.50

Figure 86: Notified cases of Q fever, Australia, 2008 to 2013, by month and year of diagnosis and state or territory 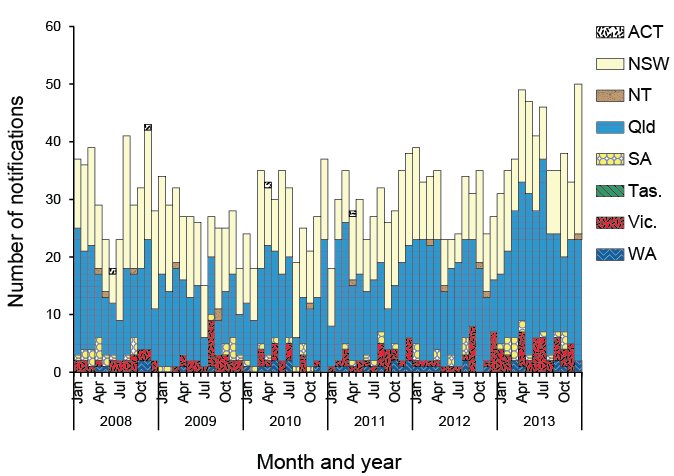 The median age of Q fever cases was 47 years (range 1–88 years) and 78% (n=370) were male (Figure 87). The highest notification rate was observed in males aged 55–64 years (6.2 cases per 100,000 male population). This was consistent with a report that found higher rates of Q fever in men aged 50–59 years, and that agriculture-related occupations (including farming) are the most commonly reported .138 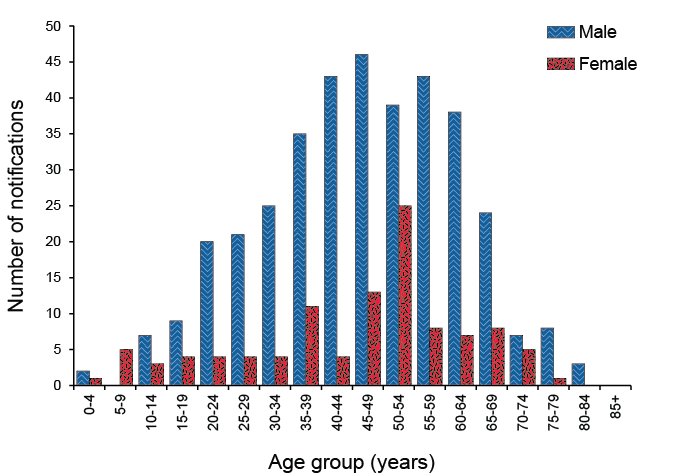 Tularaemia is a non-specific disease with diverse manifestations, often with an influenza-like onset, caused by infection with the bacterium Francisella tularensis.21 The most common modes of transmission are through arthropod bites, handling infected animals, inhalation of infectious aerosols or exposure to contaminated food or water. Small mammals such as rodents, rabbits and hares are often the reservoir.142

Tularaemia was last notified in 2011, with 2 cases from Tasmania. This was the first time that F. tularensis type B had been detected in the Southern Hemisphere.38,143,144