In 2000, the OzFoodNet network was established to enhance surveillance of foodborne diseases across Australia. OzFoodNet consists of 7 sites and covers 68 per cent of Australia's population. This report is the first Annual report of the OzFoodNet Working Group, and was published in Communicable Diseases Intelligence Vol 26 No 3, September 2002. This report can be viewed in 5 HTML documents and is also available in PDF format.

In 2000, the OzFoodNet network was established to enhance surveillance of foodborne diseases across Australia. OzFoodNet consists of 7 sites and covers 68 per cent of Australia's population. During 2001, sites reported 15,815 cases of campylobacteriosis, 6,607 cases of salmonellosis, 326 cases of shigellosis, 71 cases of yersiniosis, 61 cases of listeriosis, 47 cases of shiga-toxin producing E. coli and 5 cases of haemolytic uraemic syndrome. Sites reported 86 foodborne outbreaks affecting 1,768 people, of whom 4.0 per cent (70/1,768) were hospitalised and one person died. There was a wide range of foods implicated in these outbreaks and the most common agent was S.   Typhimurium. Sites reported two international outbreaks; one of multi-drug resistant S.   Typhimurium Definitive Type 104 due to helva imported from Turkey, and one of S.   Stanley associated with dried peanuts from China. The National Centre for Epidemiology and Population Health conducted a national survey of gastroenteritis. Preliminary data from interviews of 2,417 people suggests that the incidence of foodborne illness is significantly higher than previously thought. OzFoodNet initiated case control studies into risk factors for Campylobacter, Salmonella, Listeria, and shiga-toxin producing E. coli. OzFoodNet developed a foodborne disease outbreak register for Australia; established a network of laboratories to type Campylobacter; prepared a survey of pathology laboratories; reviewed Australian data on listeriosis; and assessed the usefulness of sentinel surveillance for gastroenteritis. This program of enhanced surveillance has demonstrated its capacity to nationally investigate and determine the causes of foodborne disease. Commun Dis Intell 2002;26:375-406.

In 2000, the Commonwealth Department of Health and Ageing (DoHA) established a collaborative network, coined OzFoodNet, to enhance the existing surveillance mechanisms for foodborne disease. This was one of a number of projects that the department established to build a strong base for national policy development in the area of food safety.1

The OzFoodNet initiative built upon the experience of an 18-month trial of active foodborne disease surveillance in the Hunter region of New South Wales.2 This pilot was modelled on the FoodNet system of active surveillance in the United States of America (USA), and provided much insight into establishing OzFoodNet (see http://www.cdc.gov/foodnet).3

The mission of OzFoodNet is to apply a concentrated effort at a national level to investigate and understand foodborne disease; to describe more effectively its epidemiology and to provide better evidence on how to minimise foodborne illness in Australia.

OzFoodNet aims to: The work of OzFoodNet will improve surveillance of foodborne disease across Australia, but many of these goals may only be realised in years to come.

Figure 1. Outline of OzFoodNet sites showing population covered (in millions) and relationship to other bodies

Top of page
In 2000, DoHA provided funding for the six Australian States and the Australian Capital Territory to participate in OzFoodNet. Each of the seven funded jurisdictions has employed one or more epidemiologists to participate in OzFoodNet. These epidemiologists report to the jurisdiction's manager of communicable disease surveillance. Each epidemiologist conducts work that is locally or nationally important for prevention of foodborne diseases. The work program includes a mixture of surveillance, outbreak investigation, and applied research.

Every 3 months, the OzFoodNet epidemiologists and a wider group meet to discuss surveillance and control of foodborne diseases and the progress of applied research studies (Figure 2). This wider group forms the basis of the OzFoodNet Working Group, which includes partners from state and territory health departments, the National Centre for Epidemiology and Population Health (NCEPH), the Public Health Laboratory Network (PHLN), and federal government agencies. OzFoodNet also communicates regularly through monthly teleconferences, and a list server.

Figure 2. Participants at the OzFoodNet face-to-face meeting in Hobart, September 2001 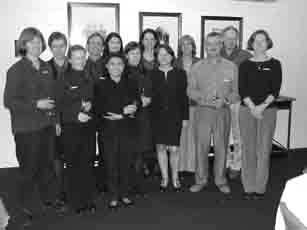 OzFoodNet currently covers a population of 12.9 million people, or 68 per cent of Australia's population. The states of Queensland, Tasmania, South Australia, Victoria and Western Australia enhanced their surveillance for foodborne disease across the whole state. In New South Wales, the health department enhanced foodborne disease surveillance in the Newcastle region which is covered by the Hunter Health Area. The Australian Capital Territory joined the Network in July 2001 and the Northern Territory participated in OzFoodNet as an observer during 2001.

OzFoodNet reports to the management group on a quarterly basis. The Department of Health and Ageing uses the data and findings to feed into national committees formulating policy, such as the Food Regulation Standing Committee, the Development and Implementation Sub-Committee and the Technical Advisory Group.

Scope of this report

This first annual report for OzFoodNet synthesises the work and reports of all site epidemiologists for 2001. The report details: Top of page


This article was published in Communicable Diseases Intelligence Volume 26, No 3, September 2002