Gastrointestinal diseases are a considerable burden on the community and the healthcare system in Australia. Foodborne pathogens alone are estimated to cause about 4.2 million cases of gastroenteritis per year.1 Surveillance is vital in gathering information on pathogen specific gastrointestinal illnesses. Surveillance data however, highly underestimate the true incidence of pathogen specific gastrointestinal diseases Figure 1. For example, the probability of a patient with gastroenteritis in the community having a stool test, depends on whether a doctor is consulted or is available, whether the doctor orders a test, patient's age, the severity and duration of illness. Even when stools are collected from patients with gastroenteritis, about 60 per cent of samples have no pathogen identified.2,3

In this section reference will be made to OzFoodNet 2002 annual report of foodborne diseases.4 This report was used as a resource for additional information on foodborne disease outbreaks in Australia in 2002.

No cases of botulism were reported to NNDSS in 2002. While no classic foodborne botulism has been reported in Australia since the commencement of notifications in 1992, there have been five cases of infant botulism reported between 1998 and 2002.

Figure 15. Trends in notifications of campylobacteriosis, Australia, 1998 to 2002, by month of onset

Cryptosporidiosis became nationally notifiable in 2001 and in 2002 NNDSS received the first full-year report from all jurisdictions. A total of 3,255 cases were reported to NNDSS, a notification rate of 16.6 cases per 100,000 population. Although Queensland reported 62 per cent (n=2,026) of all cryptosporidiosis notifications received by NNDSS, the Northern Territory had the highest notification rate, 109.6 cases per 100,000 population.

Sixty-five per cent (n=2,112) of cryptosporidiosis notifications in 2002 occurred in the first quarter of the year, of which 77 per cent (n=1,635) were from Queensland (Figure 18). Public health authorities in Queensland noted an increase in cryptosporidiosis above historical levels. Infections through swimming pools, particularly pools hosting 'learn to swim classes', were identified as sources of exposure. Public health authorities issued health alerts where they recommended measures for avoiding infection and advised the swimming pool industry to ensure that persons with diarrhoea did not use public swimming pools.

Figure 18. Notification of cryptosporidiosis, Australia (excluding Queensland) and Queensland, 2002, by month of onset

There were 388 cases of hepatitis A reported to NNDSS in 2002, a notification rate of two cases per 100,000 population. The number of notifications of hepatitis A has been steadily decreasing for the last decade, and compared to 2001, there was a decrease of 27 per cent in 2002 (Figure 19).

Figure 19. Trends in notifications of Hepatitis A, Australia, 1991 to 2002, by month of notification

Figure 20. Notification rates of hepatitis A, Australia, 2002, by age group and sex

Hepatitis A is commonly spread from person to person via close contact or from food or water that had been inadvertently contaminated by infected persons. The risk exposures among 214 cases of hepatitis A infection (55% of all notifications) showed that in 2002 the three frequently reported risk exposures identified were (in order of importance): overseas travel, homosexual contact, and household or close contact with confirmed cases (Table 6).

Table 6. Risk exposures associated with infection with hepatitis A virus, Australia, 2002, by state or territory*


* The Northern Territory and Western Australia did not report risk factors.

† Exposures are not mutually exclusive hence more than one exposure per person possible.

‡ Includes 19 cases who ate at a gathering and 51 regular restaurant/takeaway consumers.

-Data were not collected.

There were 12 cases of hepatitis E reported to NNDSS in 2002, two cases more than in 2001. Six cases were reported in New South Wales, two cases each in Tasmania and Victoria and a case each in the Australian Capital Territory and Queensland. There were nine males and three females, all aged between 20 and 54 years. Data on travel history were available for six cases and showed that all had travelled overseas. 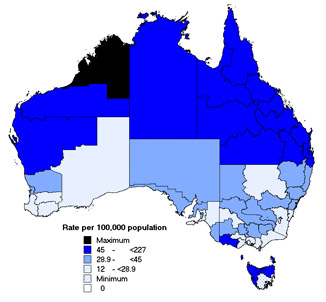 Figure 22. Trends in notifications of salmonellosis, Australia, 1998 to 2002, by month of onset

The National Enteric Pathogens Surveillance Scheme reported serovars for 7,701 isolates;5 representing 99 per cent of notified cases of salmonellosis (n=7,756) in 2002. The 10 most frequently isolated serovars and phage types of Salmonella, which accounted for 43.2 per cent of all isolates, are shown in Table 7. Nationally, as in the previous year, the most commonly reported Salmonella serovar or phage type was Salmonella Typhimurium 135. Three Salmonella types: S. Typhimurium 170, S. Hvittingfoss, and S. Muenchen, were not among the top 10 serovars as in 2001 but were among the top 10 serovars reported in 2002. The distribution of Salmonella serovars varied across jurisdictions. The most commonly reported serovars in Queensland, Tasmania, and the Northern Territory were S. Virchow (10%), S. Mississippi (48%) and S. Ball (15%), respectively. S. Typhimurium was the most commonly reported serovar in the rest of the jurisdictions, accounting for 34 per cent of cases in the Australian Capital Territory, 28 per cent in New South Wales, 60 per cent in South Australia, 66 per cent in Victoria and 15 per cent in Western Australia.

S. Typhimurium alone accounted for 23 per cent of gastroenteritis outbreaks investigated by OzFoodNet in 2002, affecting 471 persons including 61 hospitalisations and two deaths. There were five significant outbreaks of salmonellosis in 2002, four of which occurred in South Australia (S. Typhimurium phage types 8, 99,135 and 126) and one in New South Wales (S. Montevideo).4

In New South Wales, an outbreak of gastroenteritis associated with the consumption of food from a kebab shop affected at least 47 persons. Several sesame seed containing products in the shop, including tahini and hommus, were contaminated with S. Montevideo. Further investigation of unopened jars of the same products found contamination with S. Montevideo and S. Tennessee. These products were imported from Egypt and as a result of the investigation a nationwide consumer and trade recall of the imported products was initiated.

There were 51 cases of SLTEC/VTEC reported to NNDSS in 2002. With a notification rate of 0.3 cases per 100,000 population the rate of SLTEC/VTEC notifications remained stable relative to the previous year. Seventy-three per cent of cases were notified in South Australia (2.4 cases per 100,000 population), where bloody stools are routinely tested by polymerase chain reaction (PCR) for genes coding for shiga toxin. In South Australia, there was a 37 per cent increase in SLTEC/VTEC notifications compared with 2001. No cases were notified from the Australian Capital Territory, New South Wales, the Northern Territory or Tasmania. OzFoodNet reported that among typed E. coli, subtype O157 remains the main subtype (41% of total).

In 2002, 13 cases of HUS were reported to NNDSS, a rate of 0.1 cases per 100,000 population. No HUS cases were notified in the Australian Capital Territory, South Australia, Tasmania or Western Australia. Although there was a fourfold increase in HUS notifications compared to 2001, it was comparable with the three year mean (surveillance of HUS commenced in 1999; 3 year mean = 14). The lowest number of HUS notifications (n=3) since HUS surveillance commenced were received by NNDSS in 2001.

The notification rate of typhoid has been stable for the last five years. In 2002, there were 73 notifications of typhoid, a rate of 0.4 cases per 100,000 population. This represented a decrease by 14 per cent from the rate reported in 2001. The male to female ratio was 1:1 and the highest notification rates were in males aged 20-24 years (1.2 cases per 100,000 population) and in females aged 5-9 years (0.8 cases per 100,000 population) (Figure 26). The National Enteric Pathogen Surveillance Scheme identified 58 Salmonella Typhi isolates, 45 of which were from Australian residents and 13 from overseas visitors, including students. Of the 45 Australian residents, 36 had travelled to South and South-east Asian and African countries, but nine had no travel history recorded.