Legionellosis, leprosy, meningococcal infection and tuberculosis were notifiable in all states and territories in 2002 and classified as 'other bacterial infections' in NNDSS. A total of 1,980 notifications were included in this group in 2002, which accounted for 1.9 per cent of all the notifications to NNDSS.

Figure 59. Trends in notifications of legionellosis, Australia, 1991 to 2002, by month of onset 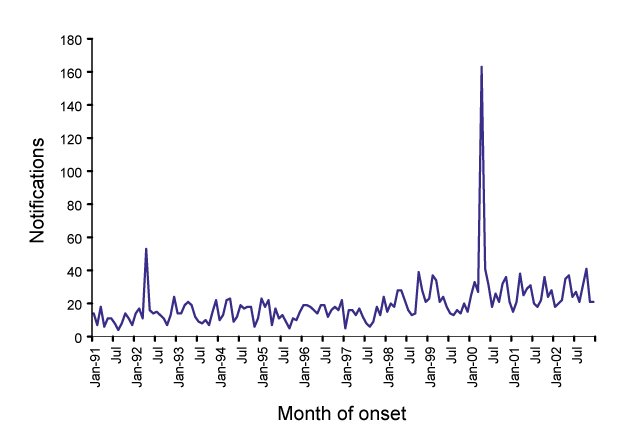 There were several outbreaks of legionellosis reported in 2002. Two outbreaks of L. pneumophila in Victoria, one involving eight cases and the other three cases, were associated with water cooling towers contaminated with L. pneumophila serogroup 1. No source was identified in another two outbreaks in Victoria in 2002. A cluster of L. longbeachae infection cases in New South Wales in July was attributed to use of potting mix. There was one death (Table 14). There were also two linked cases identified in Queensland, but no source of infection was identified

Leprosy is a chronic infection of the skin and peripheral nerves with the bacterium Mycobacterium leprae. Despite being eliminated in most countries, the disease remains as a major public health problem in six major endemic countries. Leprosy is a rare disease in Australia, with the majority of cases occurring among migrants to Australia from leprosy-endemic countries and in Indigenous communities.

In 2002, three leprosy cases were notified compared with five in 2001. The cases in 2002 occurred in Victoria, the Northern Territory and Western Australia. Two were male and one female and the age range was 25 to 34 years. Two cases were in Indigenous Australians (from the Northern Territory and the Kimberley region of Western Australia) and the third case was initially diagnosed in India.

Meningococcal serogroups A, B, C, Y and W-135 are the major human pathogens. In Australia, serogroups B and C are the major cause of invasive meningococcal disease. Internationally, WHO estimated that there are at least 500,000 invasive meningococcal cases and 50,000 deaths every year.43 In 2002 there were 684 notifications of invasive meningococcal disease in Australia, a small increase on the 677 reported in 2001. The national notification rate remained at 3.5 per 100,000 population. The highest rate was reported from Tasmania (5.5 per 100,000 population) as a result of an outbreak which began in September 2001 and continued into early 2002. The largest number of cases nationally occurred in winter (85 cases in July and 90 in August) (Figure 61).

Figure 61. Trends in notification rates of meningococcal infection, Australia, 1991 to 2002, by month of onset 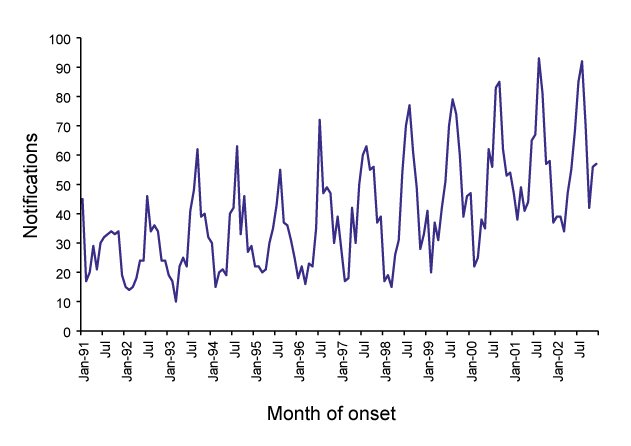 The Australian Meningococcal Surveillance Programme was established in 1994 for the purpose of monitoring and analyses of isolates of Neisseria meningitidis from cases of invasive meningococcal disease in Australia. The program is undertaken by a network of reference laboratories in each state and territory, using agreed standard methodology to determine the phenotype (serogroup, serotype and serosubtype) and the susceptibility of N. meningitidis to a core group of antibiotics. The results of the surveillance in 2002 have recently been published.46

In 2002, a total of 393 isolates of N. meningitidis was analysed by the program, an increase from the 338 isolates analysed in the previous year. Serogroup B continues to be the predominant strain for the disease (210 isolates, 53%) nationally, followed by serogroup C (162 isolates, 41%). However, there was mix in the phenotypes circulating in the different states and territories. Serogroup C strains predominated in the Australian Capital Territory (80%), Tasmania (70%) and Victoria (56%).

The pattern of age distribution for meningococcal infection varied by the phenotype. Serogroup B was more frequently reported in the 0-4 year age group (40%). In contrast, serogroup C commonly occurred in the 15-19 year age group (29.6%).

In 2002, about two-thirds of all the isolates showed decreased susceptibility to the penicillin group of antibiotics (Minimum Inhibitory Concentration 0.06 to 0.5 mg/L). All isolates tested were susceptible to third generation cephalosporins and to the prophylactic antibiotics, rifampicin and ciprofloxacin.

While Australia has one of the lowest rates of tuberculosis (TB) in the world. (Figure 63). The disease remains a public health problem in the overseas-born and Indigenous communities. In 2002, 975 TB notifications were received by NNDSS, a rate of 5.0 cases per 100,000 population a similar number and rate to 2001. The notification rates of TB were lower than the national average in the Australian Capital Territory, Queensland, South Australia, Tasmania and Western Australia as in previous years. The highest rate was reported in the Northern Territory (19.2 cases per 100,000 population).

Figure 63. Trends in tuberculosis notification rates, Australia, 1991 to 2002, by Indigenous status and country of birth

In 2002, the male to female ratio was 0.9:1. TB cases occurred in all age groups, with the highest age-specific rates reported in the 80-84 year age group (14.6 cases per 100,000 population). Detailed analyses of TB in Australia has recently been published.46