There were 3,052 notifications of arboviral infection and malaria reported to NNDSS during 2002 (3% of all notifications to NNDSS). The viral diseases notified include those caused by alphaviruses (Barmah Forest virus infection and Ross River virus infection) and flaviviruses (the viruses causing dengue, Japanese encephalitis, Kunjin virus, and Murray Valley encephalitis). Aspects of the ecology of these viruses and the clinical features of the disease they cause have previously been described.14 This section also reports on malaria notifications.

A total of 1,447 cases of Ross River virus (RR) infection were notified to NNDSS in 2002. There were 887 notifications reported from Queensland, and 178 from New South Wales. The highest rate was reported in the Northern Territory (31.8 cases per 100,000 population). During 2002 an unusually large number of RR infections were reported from Tasmania.

The national notification rates for both RR and BF infections are less than those observed in 2001. For BF the rate lies within the range observed since reporting began in 1995. The rate for RR, however, is the lowest recorded in the 11 years of data reported to NNDSS (Figure 48).

An outbreak of BF infection occurred in the Gippsland region of eastern Victoria with 50 cases notified between January and May 2002.

An outbreak of RR occurred in Tasmania with 117 cases notified, a rate of 24.8 cases per 100,000 population (Figure 51). The first cases were notified in November 2001, but most were notified during March and April 2002. The majority of cases (n=68) resided around salt flats in two coastal local government areas to the east of Hobart.

These two outbreaks were notable for occurring outside northern Australian and the eastern seaboard regions, the areas where both diseases are most likely to occur. Indeed, the rate of BF infection in East Gippsland (52 cases per 100,000 population), was the highest rate observed in Australia for 2002 (Map 7). The highest rate for RR infection occurred in the Kimberley Statistical Division of Western Australia (201 cases per 100,000 population) (Map 8). 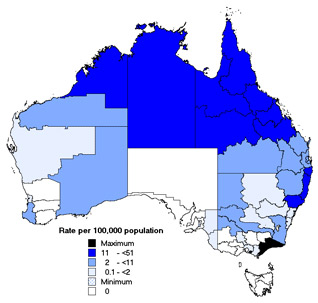 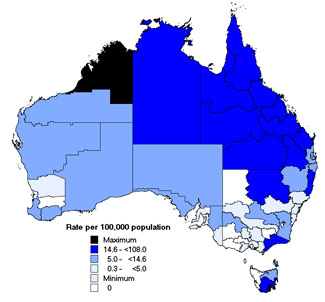 Twenty-two notifications were categorised as 'Arbovirus -not elsewhere classified' in 2002. These may include unspecified flavivirus infections (e.g. Murray Valley encephalitis or Kunjin virus), where serology is unable to differentiate the different viruses, or infections caused by other arboviruses which are not separately notifiable (e.g. Sindbis).

Dengue is transmitted within Australia only in northern Queensland, where the vector mosquito Aedes aegypti is endemic. Cases in other parts of Australia not originating from Queensland are therefore all acquired overseas.

In 2002, 25 cases of dengue were locally acquired.26 These occurred in three outbreaks in north Queensland, in March (21 cases), April (2 cases) and May (2 cases). The dengue serotypes were 2, 1 and 4 respectively. The last outbreak was also the first recorded occurrence of dengue serotype 4 in Queensland. No reports of dengue haemorrhagic fever and no deaths were reported.

Dengue has emerged as a disease of global importance.27,28, 29 Increasing urban populations and ineffective mosquito control efforts are expected to result in sustained increases in the number of cases of dengue worldwide. Computer models suggest that the effects of climate change will increase the number of people living in areas of higher dengue risk, from 1.5 billion in 1990 to over seven billion in 2085.30

Incursions of Japanese encephalitis (JE) into the Torres Strait Islands in 1995 and mainland Australia in 1998 have earlier been described.14 Since 1998 no further infections in mainland Australia have been identified, and there were no cases reported in 2002. A number of sentinel pig herds in northern Queensland and the Northern Territory are serologically tested at regular intervals to identify any new incursion of the JE virus into mainland Australia.

Seroconversions in the sentinel pig herds on the Torres Strait islands have detected the presence of JE virus each year from 1995 to 2003, with the exception of 1999. Evidence for the presence of the virus from sentinel pigs on the mainland has only occurred in 1998, the same year in which the human infections occurred.

Outside Australia, there is a strong likelihood that the JE virus is now endemic on the island of Papua New Guinea. Genetic analysis of mosquitoes collected from Papua New Guinea and Far North Queensland has shown that the two are not isolated, suggesting the spread of the virus by wind-blown mosquitoes, which has been postulated to lie behind the outbreak in northern Queensland in 1998.31 A review of the emergence of JE in the Australasian region describes the potential for JE to be introduced to Australia and how any incursion should be controlled.32

There were no cases of Kunjin infection reported in 2002.

During 2002 only two cases of Murray Valley encephalitis were notified. These were both adult males (aged 26 and 23 years) who most likely acquired their infections in the Kimberley region. The first, a Northern Territory resident who had camped near Kununurra, was notified in January 2002, and the second, a Broome resident, was notified in March 2002.

The small number of MVE notifications and absence of Kunjin in 2002 have coincided with continued widespread drought conditions in south-eastern Australia.

The massive inland bird populations of south-eastern Australia, that gathered with favourable weather conditions in the river red-gum forests of the Murray River valley and other flood-plain habitats, have substantially declined over recent decades. These dense bird populations are believed to have provided the necessary conditions for amplification of the MVE virus and then infecting mosquito populations. It was from these that the virus was then transmitted to human populations. The reduction in the bird populations has been attributed to habitat loss and degradation of the red-gum forests,33,34 which in turn were caused by altered flooding regimes and increased salinity of the river system.

In Australia, the mosquito Anopheles farauti, which occurs near the coast in the Northern Territory and north of the 18th latitude in Queensland, is the most significant potential vector for malaria. The mosquito distribution is shown in Figure 54.

An outbreak involving local transmission of Plasmodium vivax malaria by An. farauti occurred in Far North Queensland in September and October 2002. Ten people were affected, including several overseas visitors. The source of the outbreak was a traveller who probably became infected when visiting Indonesia or Africa during 2001 or 2002 (ProMed 20021123.5881).

The outbreak occurred in the same area (Cape Tribulation) as the last previously recorded episode of local malaria in October and November 1986. In this outbreak seven cases of P. vivax were identified. The index case had probably acquired malaria in the Solomon Islands.35

There are varying clinical severities associated with infection with the different Plasmodium spp. The majority of cases in Australia are infected with P. vivax (Table 12).


* One person had a dual infection, of Plasmodium falciparum and Plasmodium vivax.