This section summarises the national notification data for laboratory-confirmed influenza and diseases targeted by the standard childhood vaccination schedule in 2002. This includes diphtheria, Haemophilus influenzae type b infection, measles, mumps, pertussis, invasive pneumococcal disease, poliomyelitis, rubella and tetanus. There were no changes to the Australian Standard Vaccination Schedule in 2002.

There were no cases of diphtheria reported in 2002. A single case of cutaneous diphtheria in 2001 was the first case reported since 1993.14

Notifications of Haemophilus influenzae type b (Hib) have fallen more than 30-fold since 1991 due to the impact of Hib conjugate vaccines.15

There were 3,665 reports of laboratory-confirmed influenza in 2002, a rate of 18.6 cases per 100,000 population. In 2002, data were available from all jurisdictions for the full year, in contrast to 2001, when reporting was incomplete. Notifications of influenza showed a peak in August (late winter) (Figure 38).

Figure 38. Notifications of laboratory-confirmed influenza, Australia, 2002 by month of onset

The highest rates of influenza were in children aged less than 5 years (Figure 39). This may reflect not only the high incidence of influenza in children, but also that children are more likely to undergo virological testing for respiratory viruses on presentation to hospital. The male to female ratio was 1.2:1.

In 2002, influenza A was the dominant type, 99 per cent of which were subtype H3N2 with only a single H1N2 isolate. The influenza A (H3N2) isolates analysed were closely related to the vaccine strains A/Moscow/10/99 and the A/Panama/2007/99. Influenza B accounted for 21 per cent of all isolates and most of these were of the B/Victoria lineage, which has not been seen in Australia for a decade. This strain had a haemagglutinin closely related to the B/HongKong/330/2001 reference strain and a neuraminidase similar to the B/Sichuan/379/99-like viruses, indicating that a genetic reassortment event had occurred. These new B/Hong Kong/330/2001-like viruses were associated with two outbreaks in school groups.16 Although the 2002 influenza vaccine was not directed against the new strain, a proportion of asymptomatic vaccinees who had received the 2002 influenza vaccine showed protective antibody titres.16 In 2002, 77 per cent of the over 65 year age group in Australia received influenza vaccination.17

Of the 31 cases reported in 2002, nine were recorded as having acquired their infection outside Australia. The vaccination status was recorded for 21 cases: two were fully vaccinated for age and 19 were unvaccinated. There were a number of outbreaks of measles in Australia in 2002. In Victoria in May and June a cluster of measles in three young adults was identified. The cases were unvaccinated and had no recent history of travel. In New South Wales in the second quarter of 2002 there were two linked cases of measles. The first was an unvaccinated 1-year-old child who had recently travelled in Pakistan and the second, a vaccinated 1-year-old child contact. An outbreak in the Whitsunday region of north Queensland occurred in July and August 2002 in unvaccinated children with exposure to an infected overseas traveller. Secondary cases occurred in New South Wales as well. This outbreak had two generations of transmission and resulted in a total of seven cases from four families.18

Pertussis continues to be the most common vaccine preventable illness in Australia, with periodic epidemics occurring at intervals of three to five years on a background of endemic circulation (Figure 42).19 In 2002, there were 5,388 cases notified (27.4 cases per 100,000 population), a 43 per cent decrease on the epidemic year of 2001 when 9,515 cases were notified.

The highest notification rates were among children aged less than one year (117.4 cases per 100,000 population) and those aged 10-14 years (85.3 cases per 100,000 population) (Figures 43 and 44). The notification rate in children aged less than one year exceeded that for the 10-14 year age group for the first time since 1998 (Figure 43). This may reflect the impact of the fifth dose of the pertussis vaccine, given to 4-year-olds since 1994, and the resultant cohort effect. The overall male to female ratio was 0.9:1. 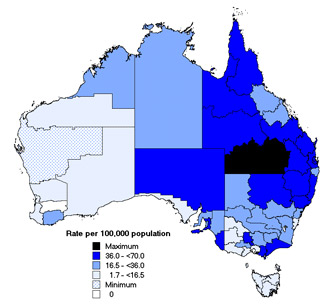 There were 2,271 notifications of invasive pneumococcal disease (IPD) in Australia in 2002 giving a rate of 11.5 cases per 100,000 population. While the largest numbers of cases were reported from New South Wales, Queensland and Victoria (Table 1), the highest rate was in the Northern Territory (32.8 cases per 100,000 population). The geographical distribution of IPD varied within states and territories, with the highest rates in Central and northern Australia.

IPD was largely a disease of the very young and very old. The highest rates of disease were among children aged less than 5 years (56.8 cases per 100,000 population) and adults aged more than 85 years (51.7 cases per 100,000 population) (Figure 45). There were more cases among males, with a male to female ratio of 1.3:1. IPD notifications peaked in late winter and early spring with the largest number of notifications in August.

Additional data were collected on cases of invasive pneumococcal disease in all Australian jurisdictions during 2002. Analyses of these data have recently been published.21

No cases of poliomyelitis were reported in Australia in 2002.

As in the past two years, notification rates were highest in males aged 20-24 years (12.9 cases per 100,000 population) (Figure 47). The male to female ratio of notified cases has been increasing since 1999 due to this residual cohort of susceptible young adult males and improved childhood immunity. In 2002 the male:female ratio was 3:1.

Figure 47. Notification rate for rubella, Australia, 2002, by age and sex

In contrast to the rest of Australia, rates of rubella in Queensland have been increasing since 2000, especially amongst young adult males aged 15-29 years and females aged 15-24 years. In 2002, Queensland accounted for 75 per cent of all notified cases of rubella (notification rate 5.1 cases per 100,000 population).

There were 56 cases of rubella notified from women of childbearing age (15-49 years) in 2002, eight more than in 2001 when the lowest number on record was reported. A single notification of congenital rubella was received in 2002, which occurred in a child infected outside Australia (Australian Paediatric Surveillance Unit report, 2002). Ongoing transmission in Queensland has resulted in two locally acquired cases of congenital rubella syndrome in 2003.23,24,25

Since 1995, less than 8 cases of tetanus have been notified each year. In 2002, there were three reported cases (two female, one male). All three cases were adults aged 64 years or above. This is consistent with the age distribution of notifications in recent years, and indicates that tetanus has become a disease of older adults.

Estimates of vaccination coverage both overall and for individual vaccines for children at 12 months, 24 months and 6 years of age in 2002 are shown in Tables 9, 10 and 11 respectively.

Table 9. Percentage of Australian children born in 2001 vaccinated according to data available on the Australian Childhood Immunisation Register, estimate at one year of age

Table 10. Percentage of Australian children born in 2000 vaccinated according to data available on the Australian Childhood Immunisation Register, estimate at two years of age

Table 11. Percentage of Australian children born in 1996 vaccinated according to data available on the Australian Childhood Immunisation Register, estimate at six years of age