In this section, the apparent cost efficiency of NSPP-funded activities is analysed based on projects' costs and their outputs, ie, the services and support that projects deliver.

Specifically, this section provides a cost analysis of NSPP-funded projects for the six month period from October 2012 to March 2013. Using MDS data, project costs have been allocated to activities in order to calculate the average cost per activity per hour for each project.

Key assumptions and caveats are as follows:

The MDS program level data identifies nine program activities. For the purposes of cost analysis, these nine activities were classified as either outputs (activities which represent project outputs) or inputs (administration and other activities which are not outputs but rather support the delivery of outputs) as follows:

Inputs: Costs were allocated to each of these nine activities based on the relative proportion of hours reported in the MDS for each activity, as summarised in Table 10-1.

Expenditure over the six month period totalled $8.1 million. This represents half (50%) of the total NSPP funding for the year 2012-13 (see Figure 5-1). Direct expenditure on output activities totalled $3.7 million (45%), and $4.5 million (55%) was expended on administrative and other input activities. Top of page

This is illustrated in Figure 10-1.

Service provision (65%) and information provision (23%), account for 88% of expenditure. Top of page

For accessibility reasons, table 10-1 is split into three parts in this html version. It is a single table in the original PDF document. 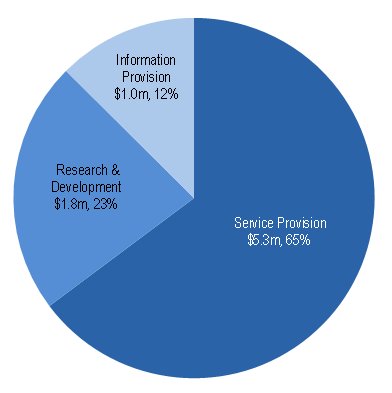 The remaining projects did not submit individual or group activity data as they solely undertook R&D and/or information provision activities, and/or worked with other organisations to build capacity rather than delivering direct services. Based on the information available, it is not possible or meaningful to identify the cost per hour of outputs for R&D or information provision.

Figure 10-2 illustrates the cost per hour and total hours of service provision for the six-month period to March 2013 for each of the 39 projects analysed.

Of the 39 projects, 36 (92%) had a cost per hour of between $50 and $700, with three outliers outside this range (two above and one below this range). These three outliers are discussed below. Possible reasons to explain these outliers are identified, based upon review of available data and consultation with the projects: 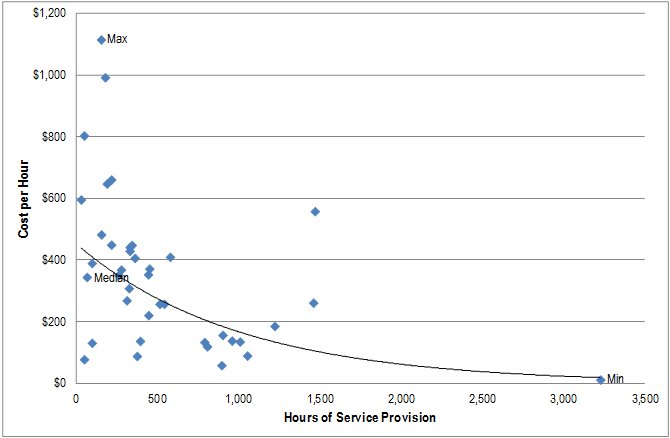 This scatter chart of hours of service provision by cost per hour shows the following key data:

Further analysis was undertaken in relation to the cost per hour of service provision, to identify key drivers of cost. This analysis explored whether cost per hour appeared to be linked to: To explore the above, projects were divided into categories for each variable as follows (Table 10-2).

Figure 10-3 identifies the average cost per hour for each of the above categories.

As indicated in Figure 10-3, the difference in average cost per hour is relatively small for two categories:

This suggests that the type of service delivered (individual or group) and the project reach (national, state-wide, local) have only a minor bearing on the cost per hour of service.

Conversely, the difference in the average cost per hour is relatively large for the following categories:

This suggests that each of the above factors potentially has a significant impact on the cost per hour of service delivery.

It is important to note when interpreting the above analysis that the differing costs per hour may reflect a range of factors, including: 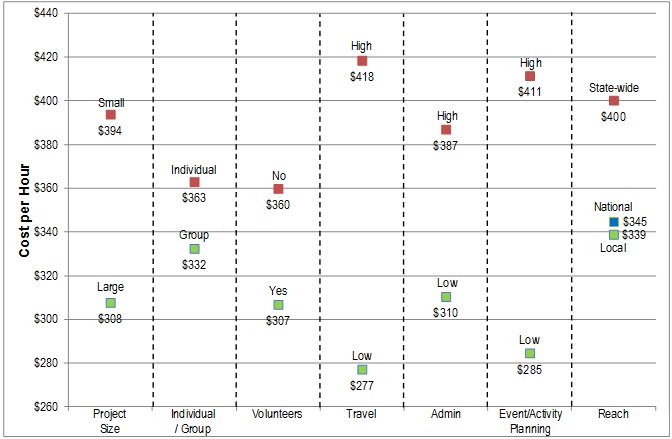