This section provides a profile of the resources and funding available to the 50 NSPP-funded projects. It provides detail on:

The following identifies the NSPP funding allocated to the 50 projects, in terms of:

Funding by year and funding round

For accessibility reasons, table 5-11 is presented as text in this html version. It is a table in the original PDF document.
Funding:

The most common funding range was between $1 million and $2 million, with half (25) of all projects receiving this level of funding. Few projects received $3 million or more, ie, only 12% (6 of 50), of which one project received funding of $10.1 million. 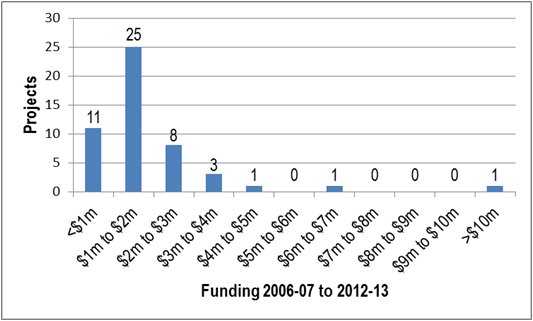 The allocation of NSPP funding by the geographic reach of projects (national, state-wide or local) is identified in Table 5-13. The reach of each project was determined based on its response to the NSPP project survey.

As identified in Table 5-14, across all 48 projects that responded, there were a total of 176.9 FTE staff and 221.7 FTE volunteers, representing a total NSPP workforce of 398.6 FTE personnel. It should be noted, however, that the majority of volunteers work in a small number of projects, with more than half of all FTE volunteers (116.7) associated with a single project.

As identified in Table 5-15, state-wide projects had notably more staff (5.7 FTE) than both national (3.4 FTE) and local (3.3 FTE) projects. Our investigation indicates that in part this may be due to some state-wide projects receiving additional non-NSPP funds, which allowed them to employ non-NSPP-funded staff. State-wide projects employed an average of 2.4 non-NSPP-funded staff, compared with local (1.1 FTE) and national (0.6 FTE) projects. By virtue of the type of work undertaken by national level projects, fewer staff may be required. This was found to be the case for national projects engaged in media work, web-based services and conference organisation, for example.

It would also appear that the average number of NSPP-funded staff employed was broadly similar across national (2.8 FTE), state-wide (2.3 FTE) and local (2.5 FTE) projects. This was despite state-wide projects receiving significantly less NSPP funding ($1.3 million) on average, than local ($1.8 million) and national ($2.5 million) projects.

Note: Information is for 48 projects as two did not respond to this question.